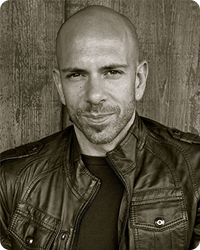 Drumming since the age of 4, David Anania knew by the age of 9 that his future--his life--belonged with music. His drumming has been featured on more than 40 recordings, including major label releases by Blue Man Group ("The Complex" Lava/Atlantic, 2003), Shannon Curfman ("Loud Guitars, Big Suspicions" Arista, 2000) and Tina and the B Side Movement ("Fall From Grace" Reprise/Warner Bro. 1998). He has toured the world and shared the stage and studio collaborations with international artists, including: Chaka Khan, Greazy Meal, Tracy Bonham, The Indigo Girls, Jonny Lang, members of Prince's New Power Generation, John Fields (Jonas Brothers/P!nk), Katherine Jenkins and Shannon Curfman. He has also been featured on television shows in the US (The Tonight Show, Good Morning America, Rosie O'Donnell), Germany (Wetten Dass..?, TV Total, Schlag den Raab) and Great Britain (The Royal Variety Performance in front of Her Majesty, Queen Elizabeth II).

David's compositional contributions can already be experienced in the Berlin production of Blue Man. In the fall of 2009, David co-composed all new drum parts for the show encore "Drum Finale." In August of 2010, David also co-composed drum music for Blue Man Group's world premiere performance of "We Are One" with internationally renown DJ, Paul van Dyk at the o2 Arena in Berlin in front of over 15,000 people. In November of 2010, David co-composed and co-arranged the music for Blue Man Group's special performance on "Wetten dass..?," one of Europe's most popular prime-time television shows (attracting well over 10 million viewers per show). In October of 2011, David performed with (and co-music directed) Blue Man Group for their electrifying version of The Who's classic "Baba O'Reilly" on Germany's TV sensation "Schlag den Raab", in front of an estimated 5 million television viewers!

David's most celebrated compositional adventure to date, however, is his scoring of all original music for the soundtrack to the Snap 180 Media documentary, "Return to Pearl" (2012). The movie documents the journey of 18 Wisconsin WWII Veterans back to Pearl Harbor, where they survived the tragic attack that ocurred on December 7, 1941. Filmed, edited, directed and produced by Chris Hibben, David was commissioned to compose the score for the movie in the early Fall of 2012 and the movie premiered in front of a sold out crowd of 600 people at the Grand Opera House in Oshkosh, WI on December 2, 2012. David is honored and grateful to have been a part of such an amazing project and he wishes to thank Chris Hibben, Old Glory Honor Flight and, most important, all of the Veterans honored in the film for giving their lives in the name of freedom.